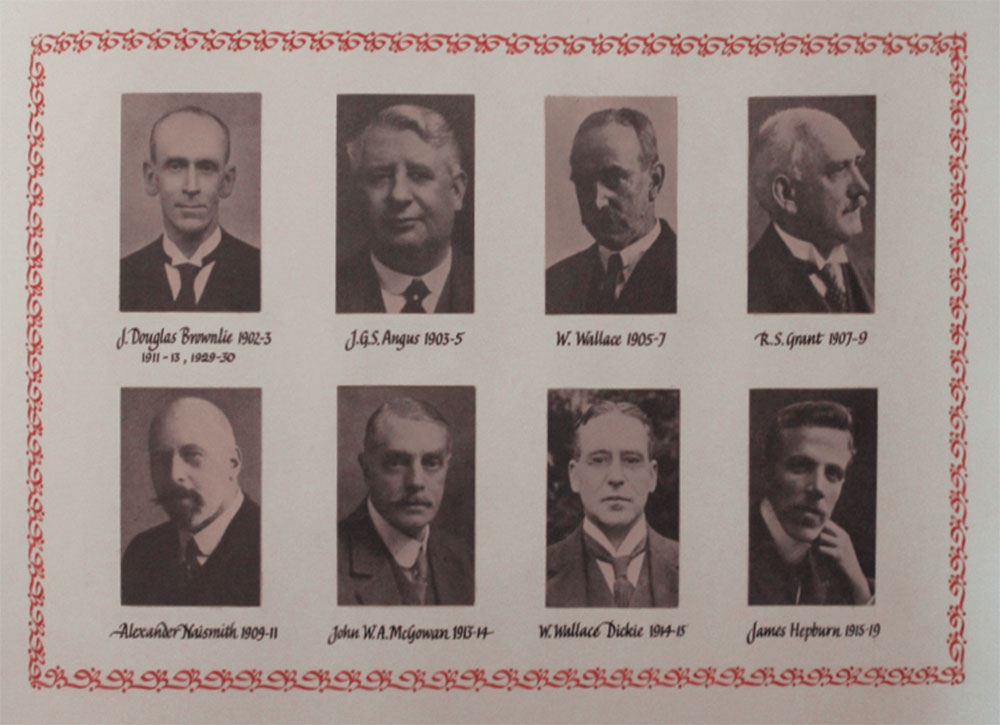 Presidents from Brownlie to Hepburn 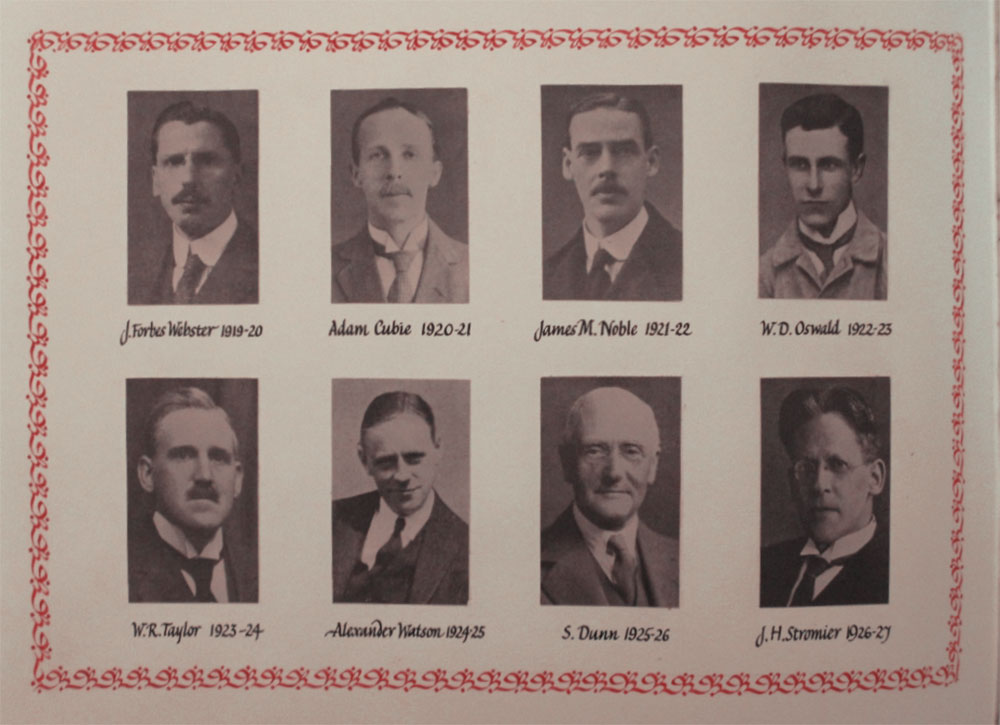 Presidents from Webster to Stromier

Dr J Douglas Brownlie: A founding member and proposer of the original name of the society (Odontoblasts Club), he was also the first president in 1902 and returned to this role in 1911. In the interim, he was the Hon. Secretary for the society and proposed that general pathology be included within the dental curriculum. He became vice president in 1908 and Hon vice president in 1939. He worked in the Glasgow Dental Hospital, then based at Dalhousie Street, and was part of the organising committee for the Western Dental Golf Club, of which he was also captain.

Mr J G S Angus: One of the founders of the society in 1902, he once stated that he hoped that the GOS would become “a large and influential body.” During his presidency, the name of the society changed and there were alterations to the Rules to allow expansion of the membership to qualified dentists within the district. He worked in the dental hospital in Glasgow when it was based in Dalhousie St

Dr W. Wallace: Described as an excellent teacher, he worked in Glasgow Dental Hospital in Dalhousie St as a dental surgeon and lecturer in dental anatomy and physiology. He introduced novel ideas to the society regarding incidence and arrest of dental caries in his retiring address in 1907. He was later appointed as lecturer in the above at Anderson’s College.

Mr R S Grant: He was Dean of the dental hospital from 1919 until 1924. During his time as president of the society, a unanimous vote was carried to form a golf section and the Odontological Prize for students was created.

Mr Alexander Naismith: He was originally a member of council and moved that the society hold an annual dinner during the winter months. He believed that the society “had a good future before it” and was the first representative of the Society to judge the cases eligible for the Odontological Prize. He worked in Glasgow Dental Hospital in Dalhousie St, and was a golf enthusiast in his spare time.

John W A McGowan: Described as “genial and lengthy,” he presented a paper to the society in November 1917 on future dental legislation that was printed and sent to secretaries of kindred societies – it is worth noting that almost every prediction made in his address regarding the subject was executed.

W. Wallace Dickie: A member of the society since 1902, he joined the council in 1909 and held the role of joint vice president in 1911. He was based at the dental hospital in Dalhousie St, where he worked as a dental surgeon.

Dr J Forbes Webster: A founder of the society and the first Hon Secretary/treasurer before the roles were split, he proposed that the constitution be altered to increase attendance at the meetings. He worked as a dental surgeon and lectured in dental pathology/bacteriology, and later in dental anatomy and physiology, in Dalhousie St. He became Dean of the dental hospital in 1924 and held the post for 23 years until his retirement in September 1947. He was described as ‘formidable, fair and helpful’ and was highly respected in his role as Dean. He was also involved with the Scottish society of the history of medicine

Adam Cubie: Described as the ‘ideal member’ in the 1930s, he was a regular attender and showed great enthusiasm at meetings. He attended GDH as a student in 1899 and qualified in 1903, when he worked in general practice as an assistant. In 1907 he opened his own practice. He held the post of tutor and lecturer in operative techniques from 1908 in the dental hospital and introduced term exams with systematic teaching. He developed teaching methodologies within the dental hospital through visits to other dental hospitals in the UK and in America. He became a member of the Board of Governors in 1948 an Hon Pres of the society in 1949.